Freeing myself to write honestly by not publishing now 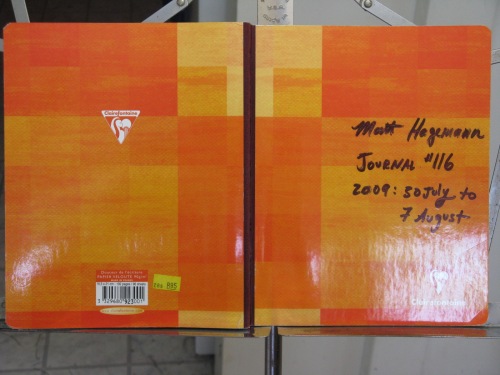 Cover of a journal, most likely one that contains content that would be unflattering to me.

When I write nonfiction, such as this text I am writing now, I become a character in the text. What the narrator “I” says here in this text are things that Matt Hagemann himself means. What I write and mean takes on a power, a legitimacy, because I, Matt, a living person of (hopefully) respectable reputation, said it.

However, everything I say or write also may change what you, the reader, think of me as a writer and also as a person. If I say outrageous or inflammatory things, you may think poorly of me (and you may even seek to discredit me or get me fired from my job, as has happened to some people).

Fiction writers and poets, by the way, have the “poetic license” to separate their creating selves from their narrating selves. This frees these writers to say terrible things in their characters’ voices and not have this necessarily reflect on the writers themselves, but also, what these characters say does not have the force of a claim made by a real person.

So, when I publish a text that I claim to be nonfiction, I am aware that I’m tying this text to my reputation. So the safest thing would be to say nothing at all. I could be a consummate professional and never say anything controversial.

And, really, I’m starting to think that that’s not all that bad of a way of living. I have written before about how I’m learning to not express my opinions in certain situations. And I’ve been thinking a lot lately about how what I have to say, at any particular moment, may not be all that valuable or useful. I have moments of wisdom, but also moments of arrogance, egotism, and worse. The world may be a better place if it wasn’t so easy to express ourselves to, essentially, a world-wide audience via the Interwebs.

And perhaps this is a rather obvious sort of insight, but I’ve long felt that my opinions were valid and useful and interesting to others. (This may be a personality flaw encouraged by my liberal arts education and by my family’s practice of frequent debates, and also by my self-confidence encouraged by my male-privilege!) For a while after college, I thought that the ideal writing job for me would be as a news columnist, where I would get paid to tell others what my opinions were.

Now I’m glad that I didn’t overexpose myself in that way. After all, it’s very easy to say or write things in the present that I would later come to regret. I’ve been noticing in myself lately how, when I read something that questions or criticizes something I believe or value, I’ll react almost instinctively with a self-righteous urge to defend or promote my own views.

But I am holding myself back more lately from actually responding. I’m getting better at seeing criticisms as merely alternate views, views that are not necessarily any more correct than my views, and that my views are not necessarily correct, either. The world may be ultimately unknowable, and so all ideas may be inadequate. Thus, I can let go of conflicts I’d start by opposing others’ ideas.

I remember reading something about the Buddhist idea of “nonattachment to views,” that one did not need to hold onto certain ideas or attitudes, because the holding on made one suffer. But lately I’m also thinking that it’s not just that I’m attaching to views, but that views are attaching to me, and I don’t want to define myself by my views.

So what I’ve realized lately is that I am less interested in expressing my views in public. I still have ideas, opinions, judgments, etc., but by writing them in my journal rather than blogging about them, I am able to keep from attaching these views to me. I would prefer to be seen as someone who doesn’t have strong opinions — I’d prefer to be seen as just a person — rather than being seen as “that liberal” or “the radical teacher” or “that crazy son of a bitch.” (Maybe there is some wisdom in that old Disney line, “If you can’t say something nice, don’t say anything at all.”)

But I do still express myself in my journals. And sometimes these journals are interesting. But I don’t want to publish things that I feel strongly about now, because I might not feel strongly about them later. If what I write is valuable in a timeless sense (and I hope it is, because I’m not interested in writing news or news analysis or in being the first person on the Internet to make a certain clever joke), then it’ll still be valuable weeks or years from now, and I can write down my ideas now and edit them later. Letting time lapse is a great way of knowing what it is that I really WANT to publish.

And even if an idea seems interesting to me once the urgency of its newness has passed, I don’t necessarily want to defend or promote the idea. I’m not trying to sell something here. The idea should speak for itself, and so I don’t really want these ideas written by a Then-Me to be associated with Now-Me.

Of course, that’s not fully possible, but one idea I’ve had is that the separation in time between the writing and the editing not only gives me the perspective I need in order to edit, it also creates separation for the reader. What I wrote 20 years ago is clearly not the product of who I am today. This allows me to edit and publish my nonfiction with a little bit of the distance that the fiction writers enjoy. I can treat my old writings as those of the Then-Me character (who doesn’t need to be as suave and wise as I’d like to think I am now!), and those writings don’t directly reflect on Now-Me.

If I were to write and publish as Now-Me (as I’m writing and publishing this post), I would feel a need to present myself as a reasonable, intelligent, well-spoken, professional sort of person. This presentation of self is basically the creation of a persona of me, not the full me. It’s basically impossible to reveal the fullness of my expression, and I’m not sure anyone really wants or needs that (for example, how interesting are most people’s self-presentations on various social-media platforms?). While some artists are praised for revealing themselves, for being “honest” or “raw,” I’m not sure most people can really live like that — I feel that I’d be less honest if I were publishing in real time). If I wrote my daily journals on a blog, I’d be self-censoring to a great extent. I gotta have privacy in order to be free, and then I can later edit my writings for the benefit of my readers — while protecting the professional career I need now to keep myself fed, warm, and writing!