Exactly seven minutes into this year’s Byronfest on July 10 (see details from last year’s here), I saw and heard a ponytailed dude shouting a lot of F-words at another dude near the Carnival stage where the ’80s cover band Sunset Strip was soon to perform. Rumor had it that the fight had caused the band to break up and be unable to perform. But a person in position to know told me that the fight was between a stage hand and the merchandise guy. The show went on. (Someone else who also heard the fight claimed that “I slept with her; I been sleepin’ with her” was also shouted.) 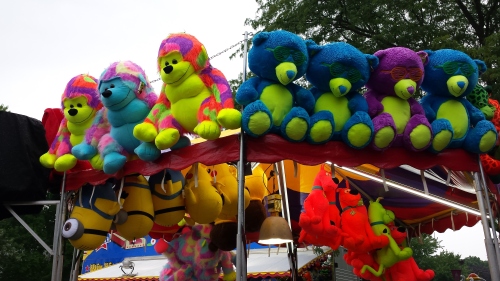 The morning before the party started, one of the fest organizers saw me walking near the Century bar about 7 a.m. and he shouted at me, out his truck window: “Goin’ to the Century for shots before this shit starts, or what?” 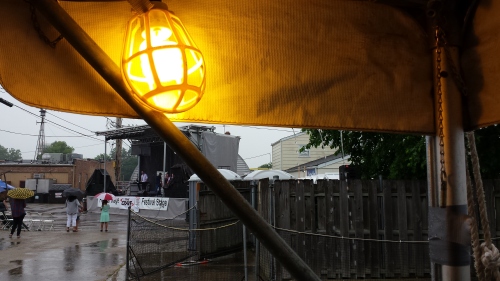 Saturday rain, from under the Lions Club beer tent toward the Festival Stage.

I spent most of my Byronfest as a volunteer fetching beer, “Ritas” (Lime-A-Rita et al), and other beverages, and counting the distributions. A Byronfest organizer saw me drinking a bottle of water Friday evening and said to me, “Hey, you’re the beer supervisor, not the water supervisor.” 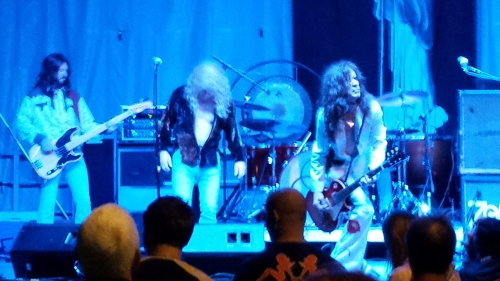 In their cover of “Moby Dick,” Kashmir’s drummer played a minutes-long drum solo, which involved both a timpani and a gong. I heard the whole solo, but I think I zoned out and my attention wandered a couple times. 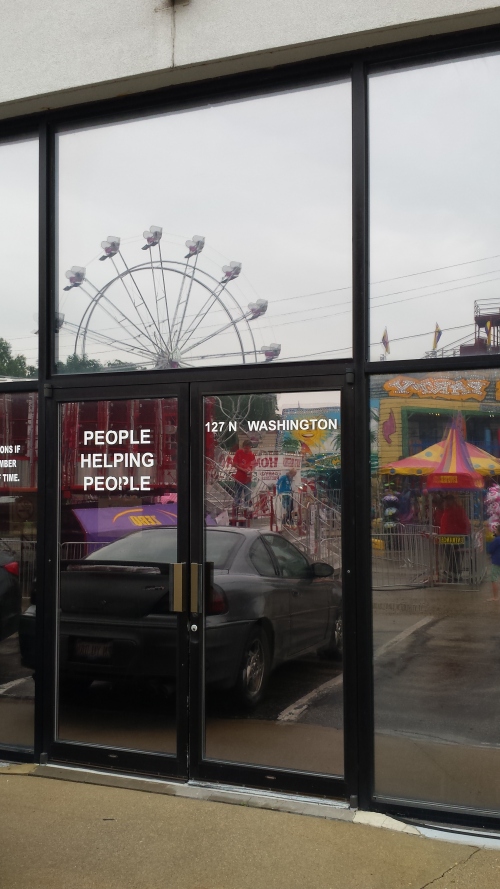 Carnival reflected in the city building’s west side.

I heard a carnival barker trochaically yell, “STEP right UP, ya WIN.” 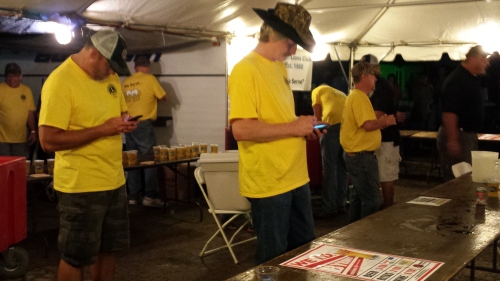 One of the Byronfest organizers asked me to fetch beer from the locked reefer while she borrowed my keys to get ice from the locked ice trailer. I said I’d just go with her to get the ice because if I gave her my keys, I’d have nothing to do but stand around and look pretty. She didn’t laugh. 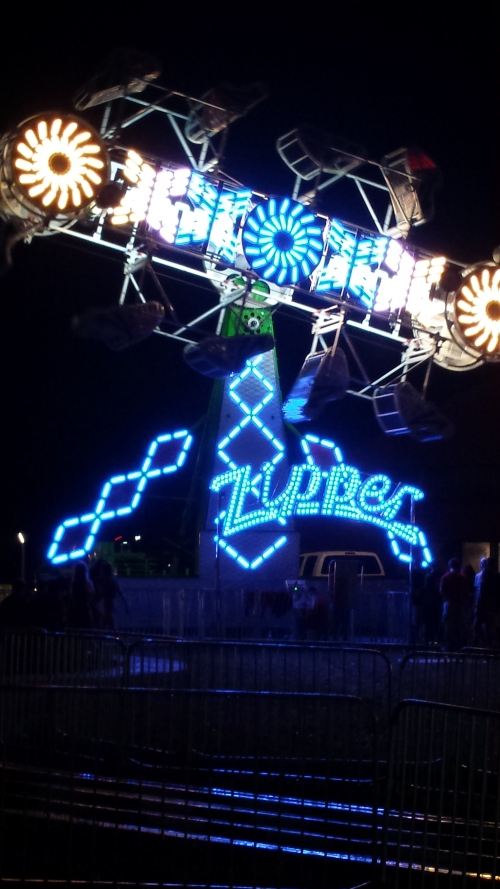 My wife and I ate dinner at a restaurant just outside one of the festival entrances. “Look,” I said to her at 7:52 p.m. Friday, “people keep showing up to this thing.” 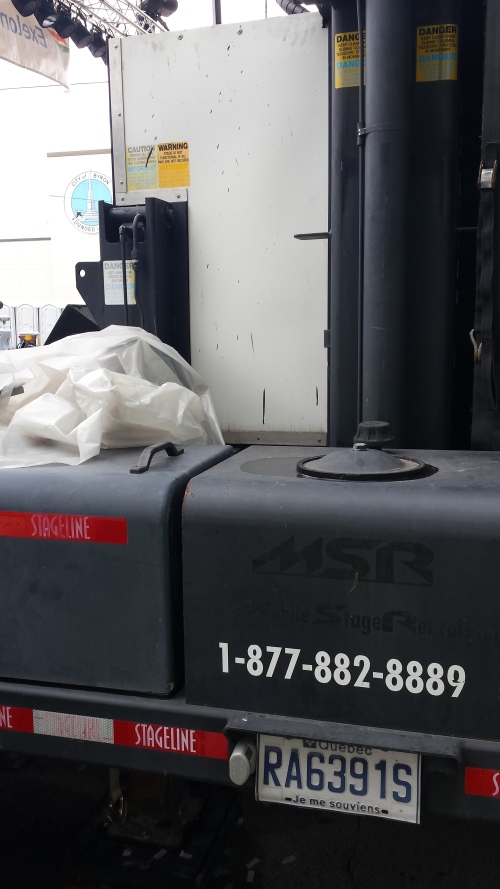 After I took this picture, I was told that this portable stage is licensed in Canada because great taxes would be paid to license it in the U.S. I don’t have any reason to believe, or not believe, the stranger who told me that.

I also brought soda to the local high school’s Key Club’s soda-selling tent. The advisor, who was in his first year, asked me whether I knew anything about another vendor who brought over a bucket of shaved ice and offered to trade it for free pop. I did not. Eventually, I was told, they made the exchange. 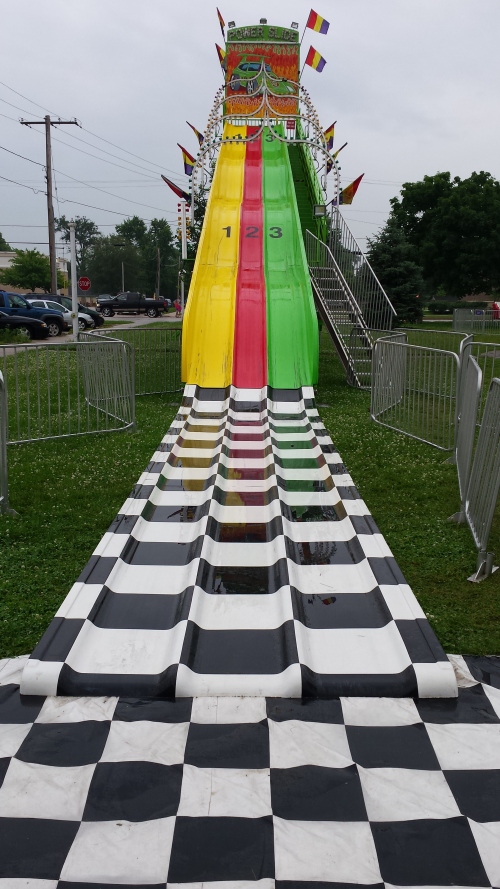 Friday night, I witnessed local TV anchor Whitney Martin take several attempts to throw a softball at the dunk-tank target before she ran up and pushed the target by hand and dunked a dude. 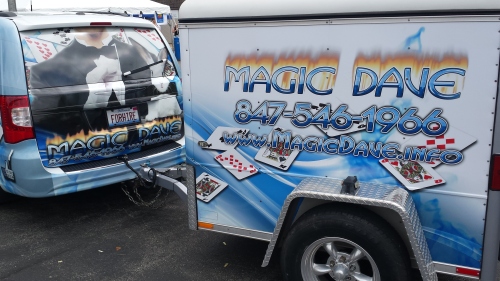 Magic Dave! Magic Dave asked me Saturday morning whom he should see about getting an extension cord to his performance location near his Magic Dave van. I didn’t tell Magic Dave, “Magic Dave, if you’re magic, why can’t you conjure your own electricity?”

Magic Dave brought my friend’s son up to participate in a trick involving red, white, and blue handkerchiefs becoming a U.S. flag. When Magic Dave finished the trick and said, “that really is the American flag,” the boy heckled from three feet away, “No, it isn’t!” My friend said his son had just seen the same trick done by a birthday party magician. 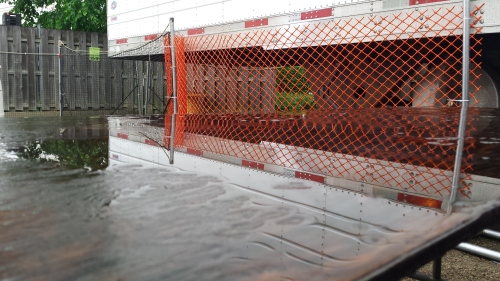 The reefer trailer for beer storage reflected in a serving table.

I wore a walkie-talkie during Byronfest. In a short duration, I heard: 1. a request for wasp spray to be brought to a ticket booth; 2. that some patron had put an admission wristband on too tight and wanted another; and 3. that an older gentleman wanted to bring his Coke onto festival grounds when signs clearly stated that no outside containers were permitted. But this man was the designated driver, and “he’s a veteran,” said the radio voice. I didn’t hear whether there was a dispensation. 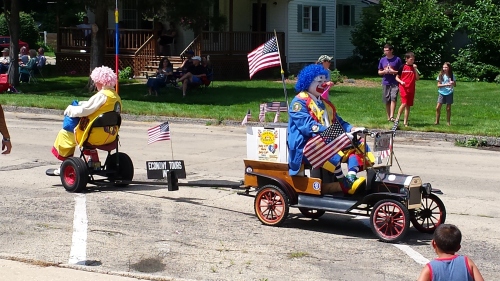 At the parade Sunday, this blue-haired clown shouted, “How’s the party over here?” as he drove.

The parade announcer, seemingly reading from a script, described that there was a dunk tank fundraiser for a local preschool, and he encouraged the crowd to “go dunk Pastor Randy!” 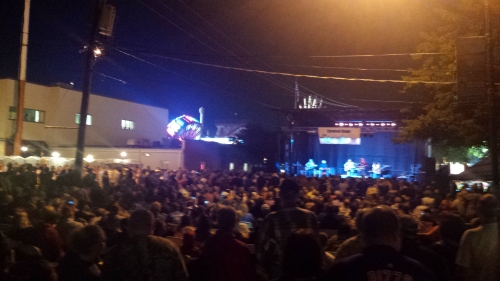 Mo Pitney’s Saturday night show. His vocal twang was strong for someone who grew up in Northern Illinois.

“In your arms, I’ve had the best, and I think the world should know,” sang a skinny dude I think was rising country star Mo Pitney during what looked like a practice or sound-check Saturday morning. I heard that line and thought, well, yeah, that pretty much sums up why anyone would ever write a love song. 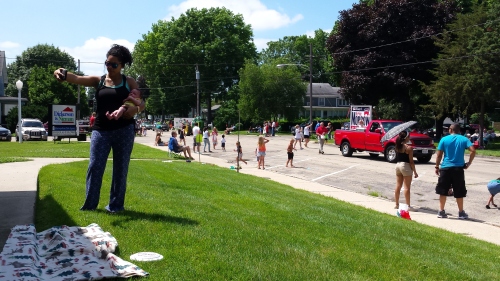 “I guess we’re ready to rock ‘n’ roll,” said the lead singer of the band Prowler at their 11 a.m. performance at the Festival Stage. He also said something about waking up the citizens of Byron. He said this to a dozen or so audience members. 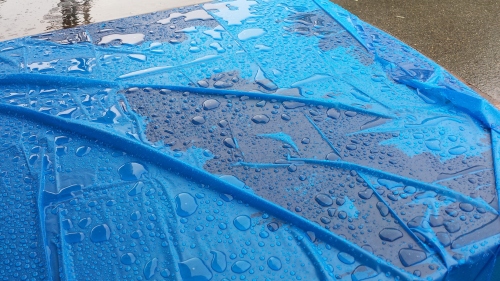 A light rain Saturday afternoon lasted ’til about 8 p.m. 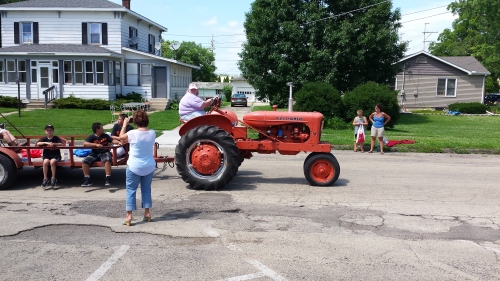 During the “old tractor” section of the parade, this photographer held up the entire procession for at least 2 minutes as she pressed buttons or something.

A friend of mine who also volunteered for Byronfest noted that one food vendor wore an apron that read, “Eat Dawn’s Taco.” These tacos were “deep fried, and they were good,” my friend said.