‘Something brilliant and beautiful’: A week’s worth of notes

“Mister (pause), yeah,” is how I was greeted by a student who’s new to my class this semester and couldn’t recall my name. 30 Jan.

“I got really mad so then I ate candy to spite her,” said my student, about the nurse telling her not to eat candy because the candy had made her tongue bleed. So, student said, she went home and ate candy. 31 Jan.

“People who aren’t friends don’t read each others’ poems,” my student  told her friend-but-temporarily-not-friend, after not-friend had asked to see my student’s poem. 1 Feb. 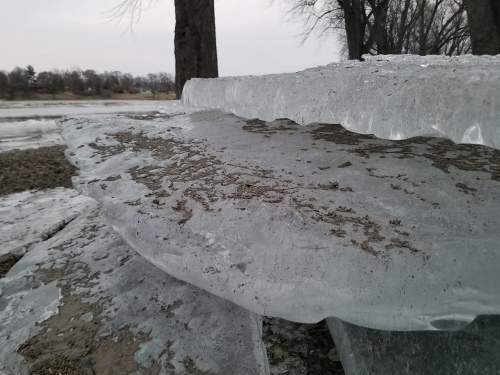 “It’s gonna be a good Friday!” said my student when he came into class Thursday morning. He seemed genuinely surprised when we corrected him. 2 Feb.

Later that same Groundhog Day, student said the namesake animal had seen his shadow so “we’ve got 6 more months of winter!” She then corrected months to weeks.

Ice floes and geese in the Rock River (and my dog near the river) at Byron. 4 Feb.

When student came back from the bathroom, classmate asked, “Did everything come out OK?” 2 Feb.

After a student accused someone of being “gold-digging” because she was wanting to marry a wealthy person, I sarcasted, “Yeah, why not date losers? ‘Unemployed? Got three fingers? Come on down!'” And then my students discussed which three fingers it’d be best to have. As if such a mutilation were a choice, student asked others, “Which ones are you keeping?” A second student said he’d keep thumb, middle finger, and pinkie, but student three said the extended middle finger “would start a lot of fights, though.” 2 Feb.

After I said my prizes for my class’s poetry bingo game would be “something brilliant and beautiful,” student quipped, “Is it me?” 2 Feb.

Reading the Bible symbolically, not literally (because if the Bible is read literally, issues arise, such as are Cain and his wife practicing incest?), could be like how our dreams don’t always make sense. Perhaps fantastic narratives and symbolic stories arose from dreams? 2 Feb.

Cups in a chain-link fence.

This entry was posted in From the pocket pages, Photos, Transcribed from life and tagged notes, photos, quotes. Bookmark the permalink.