Finding and becoming, sorta simultaneously, who I was

Will Leitch praised three people he knew in their pre-success days. He quotes something as saying how your adult life is shaped by choices you made as a teenager—well, sure, but I don’t feel I was blindly holding on, in years after, to some dream I had as a teen. I feel more like I was becoming—well, finding and becoming, sorta simultaneously—who I was, and sure, I write, as I did in high school, but not the same thing, nor the same way. But somehow I wasn’t jealous of these people Will praised—even if he almost seemed like he was jealous, his praise too effusive. 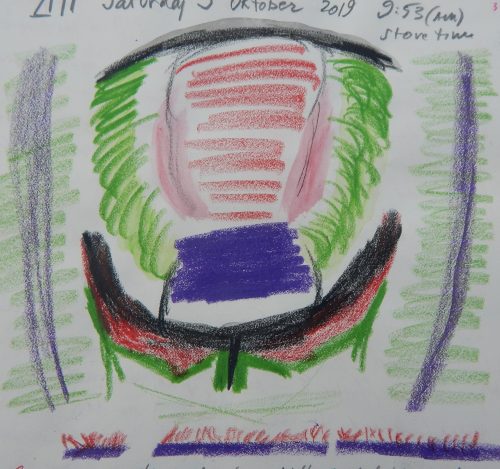 Anyway, yeah, this notebook’s paper definitely isn’t as thick (or ready for water color) as the 130-lb. paper of previous journal. But that’s OK, too. I went really light on the water today, too, and still it seeped into page below.

Will’s formulation that these three he praised kept going when others fall away from their early plans seems a little facile, I’d say.

I walked dog to park on this chill morning—we left here about 7:40, breeze from east, I had my C____ coat on and put hood up. And I got a little upset in my own mind about a dude—the owner of ___ …, letting his dog off leash (as I’ve seen him do before), and I saw his dog poop in northeast corner of park as dude walked ahead, not picking up the poop nor even seeming to see it.

And I’m venting here in journal rather than yelling at dude in real life. And I could let this whole thing go, but let me say this: I talked myself down from being upset. What worked best was to note that I felt upset and not try to say I was wrong. I was bothered by the thoughtlessness—others use this park, too, buddy—and the unfairness—I pick up my dog’s poop—everyone should do his and her part.

But I didn’t really wanna cause a scene. We all live together. I don’t want to dread seeing him in park in future. Also, my yelling at him—or even any gentle correction of him—wouldn’t likely improve his behavior. So, yeah, I debated this as I walked the last 2/3 of the trail. On the first third, I’d picked up (in a bag already containing some Sam poop) some small-dog-asshole-gauge poops. And I started thinking I was a good person for picking up after that neglectful dog walker. But I told myself to do the good deed (if you choose to do it, do it) without condemning (mentally to myself) the person who did the wrong thing.

This entry was posted in From the journals and tagged 2019, random editing. Bookmark the permalink.